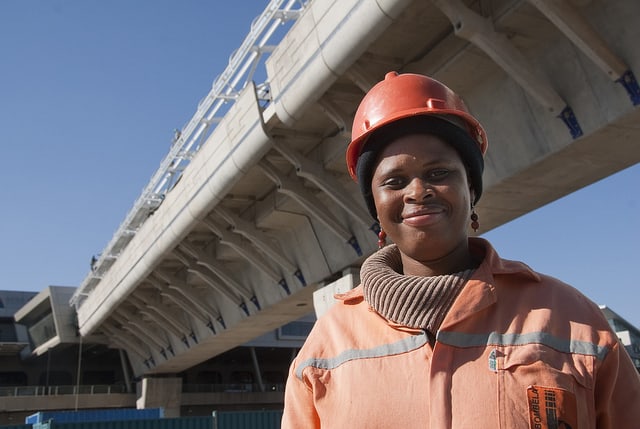 Almost everyone probably pictures a man when they hear the term "construction worker," but that may change pretty soon.
For example, construction projects at the Brooklyn Navy Yard in New York, like a high-rise modular building currently being erected, involve a significant portion of women, according to a report by CBS.

However, the male-dominated field is not always welcoming of women.

At the Brooklyn Navy Yard, roughly 17 percent of newly recruited skilled workers are women, a significant jump from 2013 when only nine percent were female.

Unlike other industries, women don't seem to be getting paid less in construction than their male counterparts. Rita Walsh, a forewoman at real estate development company Forest City Ratner, said unlike her old job where her male counterpart earned $2 more per hour than her, in construction, it's the skills alone that determine how much you earn.

“If you get into construction, whatever your title is no matter if you’re male or female, you’re making that money,” Walsh expressed.

The industry is now slowly beginning to open up to females, with many companies welcoming women to construction projects. Forest City Ratner, is coordinating with community programs to increase opportunities to hire female workers.

“Starting salary for entry level starts at $17 and it ranges up there depending on your level,” according to Liz Canela of Forest City Ratner.

The thought of working in a stereotypically male industry hasn’t stopped women from putting their skills up in construction alongside equally skillful men. In fact, the women that have gone for it seem to relish it.

“The guys aren’t that bad, you can handle them. How many women can say, ‘Oh I could build that house?’ I say go for it!” said carpenter Josephine Morales.